Federal state with three politicallevels given as-:

Switzerland – A research nation –Federal Institutes of Technology in Zurich (ETHZ) and Lausanne (EPFL) arerenowned worldwide for their research output.

Education system – Responsibilityfor education is shared between the federal authorities, the Cantons and thecommunes.

“Bologna” system in all Swissuniversities (Bachelor and Masters degree programmes).

99% of companies are small andmedium-sized enterprises (SMEs) with a maximum of 250 employees.

IELTS is not mandatory forSwitzerland however the admission requirements of institutions may ask for it.

For accessingSwiss universities undergraduate programmes, a valid Swiss maturity certificateor an equivalent foreign upper secondary school-leaving certificate qualifyingfor university entrance is required. The prerequisite for access to a Master’sprogramme is a successfully completed Bachelor’s level programme. For foreigndegrees outside the Bologna system (degrees awarded in India fall under thiscategory), each of the universities makes its own decisions on equivalence ofdegrees.

The academicyear is divided into two semesters. The first semester of the academic year(“autumn semester”) spans from around the mid of September to the end ofDecember; whereas the second semester (“spring semester”) is extends fromaround mid-February to beginning of June. 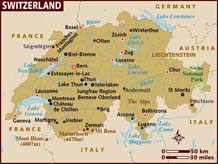