New Zealand is in the southern hemisphere, so January and February are the warmest months, autumn is from March to May, winter is from June to August, and spring runs from September to November.

The climate is temperate with relatively mild, wet winters and warm, dry summers. The weather varies a lot between different regions – the far north is subtropical while the south gets icy wind straight from Antarctica. The far north of the country has an average temperature of about 15°C, while the Deep South has a cooler 9°C average.

New Zealand does not have a large temperature range, lacking the extremes that are found in most continental climates. However, the weather can change unexpectedly — as cold fronts or tropical cyclones quickly blow in. 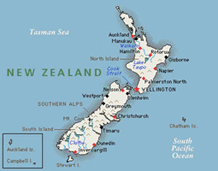