Currency: The unit of currency in Canada is the Canadian dollar. It takes 100 cents to equal one dollar. Canada also has one-and two- dollar coins. The amount of Canadian money it takes to make a U.S. dollar changes daily.

United Nations consistently lists Canada as one of the best places to live in the world.

Immigrants make up to 60% of Canada’s total population growth.

Internationally recognized credits, diplomas and degrees – more than 100,000 international students attend Canadian colleges and universities each year.
Canada ranks 7th among the most popular travel destinations in the world. 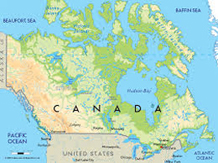